Starting the new year off with a ban

Happy New Year everybody! I hope everyone had a fun and safe holiday season and that 2011 brings good fortune to all. 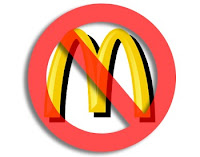 I had a nice rest over the holidays, which is good because things are going to ramp up this week again with the Consumer Electronics Show in Las Vegas. I'm flying out tomorrow and will endeavour to post some reports here from the show. I'll definitely have some goodies to share next week.

In the meantime, what better way to kick off a new year than with some bans? We've got a good trio of them here in Sex, Bombs and Burgers land.

Next up is the inexorable march to stamp out fast food. A group called the Physicians' Committee for Responsible Medicine has asked the mayor of Detroit to ban the opening of new fast food restaurants because the city has the fourth-highest rate of heart disease in the U.S., and of course all those burgers and fries are apparently responsible. What's awesome is the response from the Michigan Restaurant Association spokesperson: "Restaurants do not lead to obesity, what leads to obesity is maintaining an unhealthy lifestyle." I've heard that before, except it used to go something like, "Guns don't kill people..."

Last up, in a move that should surprise no one, the U.S. military last month banned the use of removable media. Following the (cyber) atom bomb of the Wikileaks fiasco, anyone caught using a DVD, CD or USB drive will be court-martialed. Yikes. Guess all those whistleblowers will just have to break out the retro technology: it's back to the photocopier and miniature cameras for them.
Posted by Peter Nowak at 6:00 AM
Labels: censorship, china, Facebook, food, Google, sex, war