I've been going on a lot lately about some of the bad information out there in the media regarding technology and its effects on people and/or society. I guess it's a bit of a hangover from my TEDx talk, where that was basically the topic. 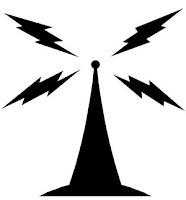 One of the current situations that I didn't mention in my talk, but wanted to, was the whole to-do we have here in Ontario regarding the use of Wi-Fi in schools. A couple of concerned parents up in Simcoe country have become convinced that wireless internet access in schools is giving their kids headaches. Apparently, when the kids are at home, they're fine.

Health Canada has thus far ruled that there's no risk from Wi-Fi, or cellphones for that matter. The general common-sense consensus, meanwhile, seems to point the finger at the kids themselves - as in, gee, I sort of remember school giving me a headache too, and making up any excuses not to go. Oh, how I wish we'd had Wi-Fi in those days. What a nice boogeyman it would have been. (A word of advice to kids: don't scapegoat Wi-Fi because by that logic, your parents probably won't let you have a cellphone. Unless, of course, they're really stupid.)

When the parents complained this past summer, the issue got absolutely tons of media attention, so much so that the government launched an inquiry.

Well guess what? A government committee reported back last week after looking into the issue, and they found nothing wrong. The Standing Committee on Public Health says "we would like to reiterate that, to date, there has been no credible science linking exposure to electromagnetic radiation emitting devices and adverse health effects.” The committee also recommended setting up a system where people can report potential side effects of Wi-Fi usage for further study, which sounds like the vaguest possible appeasement to the complaining parents. You can check out the full report by clicking here.

So how much media coverage did this report get? Well, a Google search of "Health Canada Wi-Fi" turned up only , only one of which was from a major mainstream outlet (my old colleagues at CBC, actually).

As I said at TEDx, there is loads and loads of reporting out there, but very little journalism. Going back to the original story and reporting the other side qualifies as a type of journalism. Like anyone, I enjoy being right, but this just happens something I hate being right about.

The scariest part of the report, though, is an addendum from the New Democratic Party (which represents Canada's left). The NDP naturally disagrees with the findings and says, "children should not be forced to be exposed to this technology in their schools until it is actually proven safe, not just theoretical acceptable."

That's a really astounding position to take because there are very few technologies that have actually been "proven" to be safe. We can't even say that of the oldest technology: fire.

My question for the NDP, then, is pretty simple: please list five technologies that have ever actually been proven safe, and then we'll talk about Wi-Fi.
Posted by Peter Nowak at 6:00 AM
Labels: government, health, media

The technology (microwave radiation) has been found to be dangerous many times over.
You need to get up to date with the evidence before you make iresponsible statements such as these.
Do some research at www.bioinitiative.org and you will learn much.