Double Down numbers don't add up 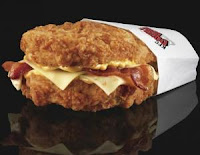 I promised about KFC's Double Down anymore, but I came across an intriguing fact the other day while I was updating past blog entries (I'll be switching this blog over to just WordsByNowak.com very soon, with SexBombsBurgers.com redirecting there).

You may recall that KFC Canada pulled the Double Down - the infamous chicken sandwich with no bun - in November after its promised month-long limited-time offer. The company said the sandwich was a huge seller, with more than a million Double Downs gobbled up in a month. At the time, I mused about why the chain would pull such a hot item, and that it was obviously a marketing ploy so that it would again receive a heap of media coverage when it inevitably relaunches.

But hold on just a second. If we look back at the reported numbers for the U.S., things look a little fishy... er, chickeny. KFC launched the sandwich in the U.S. in April and after three months sold 10 million, which sounds like a lot to us Canadians but in reality is very little because it breaks down to about 3.3 million per month. In a country with ten times the population and arguably ten times the appetite for fast food, the U.S. should have posted much higher numbers. Indeed, the company labelled the Double Down a flop, with sales being "immaterial."

So what gives? The Double Down received about the same amount of media attention in the U.S. as it did here. Why was the poor-selling sandwich permanently added to U.S. menus but the hot-selling Canadian counterpart pulled?

Are Canadians really that into bunless chicken sandwiches, or has somebody been fudging the numbers?
Posted by Peter Nowak at 6:00 AM
Labels: food, kfc