War? There's an app for that 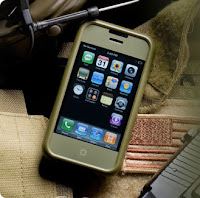 USA Today had an interesting story yesterday, reprinted from the Army Times, about how the U.S. military is looking to adopt smartphones for soldiers to use. According to the story, the Army is looking to "issue these smartphones just like any other piece of equipment a soldier receives."

In February, some soldiers will get an iPhone, Android device or other smartphone to keep up to date with information and communications. The smartphones will allow soldiers to keep in touch and track each other with video from unmanned aerial vehicles overhead. The plan is to give them a monthly stipend to spend on minutes and apps, with the military also looking at how it can incorporate devices like Amazon's Kindle and Barnes and Noble's Nook e-readers.

This is the latest in the commercialization-of-the-military trend, where soldiers are making increased use of off-the-shelf technology. There are already military , and the armed forces with building supercomputer clusters comprised of PlayStation 3 consoles, and using iPhones to calculate bullet trajectories.

One of the best examples - which I talk about in Sex, Bombs and Burgers - is the incorporation of game console controllers into robot systems. Some land-based military robots today, like iRobot's Packbot, are driven with PlayStation and Xbox controllers.

The reason for the military's increasing shift to off-the-shelf technology is simple: it's getting amazingly easy to use, and it's getting amazingly cheaper by the day. Custom-built stuff from military contractors, on the other hand, can often be complex and expensive. The result is that the ties between consumer electronics makers and the military are growing ever stronger.
Posted by Peter Nowak at 6:00 AM
Labels: army, iphone, mobile, war